Our Dealer, Shri Asoo Maurya ( 45 Years), a Style Icon, was born in the family of a dynamic Political leader. His father Prof. B.P.Maurya had held many ministerial posts as Union Minister of Industries, Agriculture etc.

Asoo Maurya completed his schooling form Modern School Barakhamba Road New Delhi. After passing out from school he completed his Eng (Hons) Degree from Delhi University. He is a Bachelor of law (LLB) and MBA. He is married to Preeti Singh . They have two children, elder one a boy named Aadityavikram and younger a girl named Mannat both studying in Modern School, Delhi.

Asoo Maurya starting from the beginning of his business strongly believed that ”A satisfied customer is a repeat customer“ which can lead to greater sale & profit . To make his dreams turn into reality, Shri Maurya took lot of risks in starting new initiatives in his Retail Outlet, gaining First mover’s advantage and developed the concept through regular customer surveys and feedback.

We will talk about the journey of this dedicated dealership from 1999 to 2014. In these 15 years they have done a lot of things but ”Differently”.

In 2002 Martin Motors got their first award for outstanding performance in most difficult situations (HSD), Dwarka then being a remote area in Delhi. In 2004, Martin Motors got awarded the Campaign champion for” Jaanchiye Parakhiye Jeetiye”for getting the maximum no of quantity checks. From 2005 to 2006, Martin Motors, got awarded the “Diesel Champion” & the “Petrol Champion”. It also received “Customer Service Award” and “BVQI Excellence Award for securing the highest marks in India, BVQI 96.28%, 97.2%, 98.8%. Then again it was awarded the “CLUB HP CHAMP “and “CLUB HP –The Experience’.
Asoo Maurya represented Delhi in many zonal meets and also attended All India Retail Dealer Panel Meet on behalf of North Zone. Martin Motors was also awarded “Best SOP performance award” in Delhi Retail Region in 2013.

Shri Asoo Maurya started first MRF Dealership counter in HPC outlets in Delhi. Martin motors was again the first to introduce Nitrogen in 2005, It was a new concept and therefore customers were incentivized to try out Nitrogen in their tyres. Special Green colour valve caps were provided to differentiate the nitrogen customers. Customers were educated and informed about the benefits of Nitrogen. Martin Motors added Vehicle Care with the facilities like Automatic tyre changer, Computerized wheel alignment & balancing with the installation of State of art Italian machines. In 2004 Pollution Under Control (PUC) Machine for Petrol Vehicles was installed to cater to petrol vehicles.
In 2006 Pollution Under Control (PUC) Machine for Diesel Vehicles was also added. Currently Martin Motors caters to all vehicles including LPG, CNG for the PUC check. Another Dealership of Exide was added in the Year 2010 to add on to the Vehicle care facilities at the outlet. Car Insurance thru ‘ Bajaj Alliance’ is also being run very successfully here.


To push the Racer 4 sales up, an automatic oil changing machine was installed which was replicated in all Delhi Retail outlets. It Greatly Helped HPCL to boost Forecourt Lube sales.
MARTIN MOTORS since the commissioning of the outlet does not charge the customer for changing the oil in their vehicles. 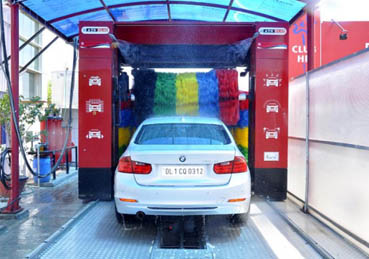 The concept being to serve 60% of the on road vehicles i.e. the 2 wheelers and majority of which use the unorganized sector for their oil changing needs. Moreover no technical expertise was required to operate the machine and its cost was easily recoverable through high Lube sales. The key to the success of this initiative being aggressive Customer awareness by FSMs, through incentivization, Quick oil change and visibility of the Oil Change operation.

In 2013, for the first time a unique ”Loyalty Programme” was launched to promote Customer retention. In this loyalty programme customers were enrolled for yearly free service of Nitrogen to them, along with it upto 20% discounts were provided to the customers so that the Customers can be made aware about lubricants availability at the retail outlet.
Besides above, 20% discount was offered on PUC, upto 50% off on alignment, balancing, and tyre rotation. Also offered was 6% discount on Exide Batteries and 8% on MRF. The loyalty program was a huge success, key being Customer awareness through dedicated Marketing person.

In early 2014, State of art, Auto car wash by ATS ELGI was installed at the retail outlet spending aprx Rs 20 Lakhs. This car wash has a profile Shampoo, Drying, wax , top and under body wash in just 7 minutes which is the USP of this machine. Now on customer demand they have added car detailing services like upholstery Dry-cleaning, Waxing and polishing etc. To further enhance the customer experience they have a fully air-conditioned customer lounge equipped with satellite TV, free Tea & Coffee through a vending machine.

All the efforts done by the dealership has added to the revenue growth of the Retail Outlet and all the Value added services have added to the image of a one stop shop leading to increased number of Customer foot falls. The vision of Martin Motors which was named after Martin Luthar King has always been “The more you engage with customers the clearer things become and the easier it is to determine what you should be doing” & they have proved that .